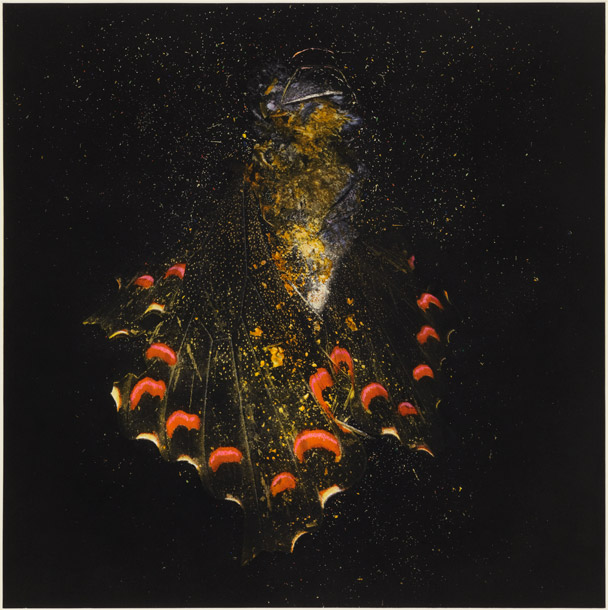 ‘As I manipulate them, the butterflies evolve into other beings. I discovered that to make them work, I had to find some other creature in there and tease it out. The right time to finish was when the beast had fully emerged... It was important not to push them further into caricature. They had just to hold a form together which was other than what they were, a squashed butterfly... It raises the question: is it construction or destruction?’
- Mat Collishaw

Mat Collishaw's practice is governed by an aesthetic of the 'uncanny', in which the familiar performs unsettling tricks on the audience. Taking many of his symbols and themes from much older art forms, he cites desire as the starting point, drawing on a dark and fanciful human psyche with unsettling flights of imagination, one populated by wounds, prostitution, fairies and illusion. The Victorian sublime, with its symbols of desire, abjection and C19th enlightened rationalism, is critiqued by Collishaw's insistence on human fallibility. This juxtaposition of contemporary images and historical references produces a highly charged visual experience that tests the viewer's resolve and sensibility, creating mixed feelings of enchantment and disenchantment. We are at once horrified and seduced by images that merge the cruel and the caring, the morbid and the poetic, the repulsive and the alluring.
The 'Insecticide' Project

Velvety wings in iridescent shades lie trapped and torn. Antennae stick out at odd angles. Internal juices bleed from crushed thoraxes. Entrails spill and smear across the picture plane. Camouflage — one of the most wondrous characteristics of insects — is here obliterated; each head reduced to a morass of matted corporeality. Flecks of fur and wing scatter out into a black, almost cosmic space, a space in which the microscopic and the macroscopic have become confused.
- Nina Miall